What preventative measures are we taking against COVID for indoor classes?

All coaches are fully vaccinated.

Our COVID-19 policies and procedures

Is my child ready to join?

Students must have the cognitive and physical ability to participate by being able to remain calm and regulated enough to follow simple 3-5 step commands. For example, students should be able to remain on the mat on their own and play the game Simon says.

During the 1-on-1 Assessment your child will be given some time to get familiar with the gym if necessary. As the session progresses your child should already be able to interact with the coach. Student must have the skills to do the following with minimal prompting from our coaches:

At the end of the 1-on-1 Assessment, our coach will share with you her/his observations, let you know if our program is fit to help your child and which class she/he recommends (Private, Fundamentals, Intermediate and Advanced.)

Is my child old enough?

Most students are between 6 and 15 years-old. Contact us for more information for teenagers and young adults.

Does my child need a diagnosis to join your class?

No. Even if most of our students have a diagnosis (ie: ADHD, autism (level 1)/Asperger’s, ODD, anxiety, sensory processing disorder, motor planning disorder, …), some others don’t. If your child is not ready to join a typical martial arts school but meet the pre-requisites evaluated during the 1-on-1 assessment, our program is a fit for you.

Can I watch the class?

Of course, you are more than welcome to observe. We will simply ask you to not react or call out your child. The mat should be perceived as a safe space for him/her to act naturally without fear of being criticized or seeking your attention. This environment helps us to evaluate more effectively the child’s progress. There might be a time where we will ask you to sit a little further but we will definitively come to you if needed. On the other hand, please do not hesitate to share any tips, observations, comments or feedback outside of the class with us.

What’s the difference between Fundamentals, Intermediate and Advance classes?

We have 3 group class levels (Fundamentals, Intermediate and Advanced) to match as much as possible each student’s profile. The differences are based on the class duration, size, coach-to-student ratio, class pace, coach flexibility, support required and Jiu-Jitsu curriculum.

What does my child need to wear?

During the first classes, your child simply needs to wear clean gym pants and a t-shirt that are not too loose.

Once you have decided to have your child train at Bel Air, we recommend purchasing our partner’s gym gi uniform ($100), the standard Jiu-Jitsu uniform composed of a heavy cotton jacket and reinforced trousers. The reasons to wear a gi are hygiene, team spirit and also functional (many techniques rely on the gi and it also slows down movements which facilitates learning.)

Since the gi uniform isn’t quite a sensory friendly clothing, we recommend students with sensory to wear compression clothing under their uniform.

How much does it cost?

We offer monthly membership. The cost decreases based on the class level (ie: Fundamentals, Intermediate and Advanced).

Note: We are not eligible for insurance reimbursement.

How do belt promotions work?

There are 5 belts in Brazilian Jiu-Jitsu for adults: White, Blue, Purple, Brown and Black. Children under 16 receive Gray, Yellow, Orange and Green belts which are intermediate belts between White and Blue.

White stripes on belt is a way to measure progress between belts. Once a student receives 4 stripes on his/her belt, he/she is closed to be promoted to the next color belt.

Stripe and belt promotion are awarded for training time, Jiu-Jitsu knowledge and skills developed, and most important how students carry themselves on and outside of the mat (ie: behavior, attitude). 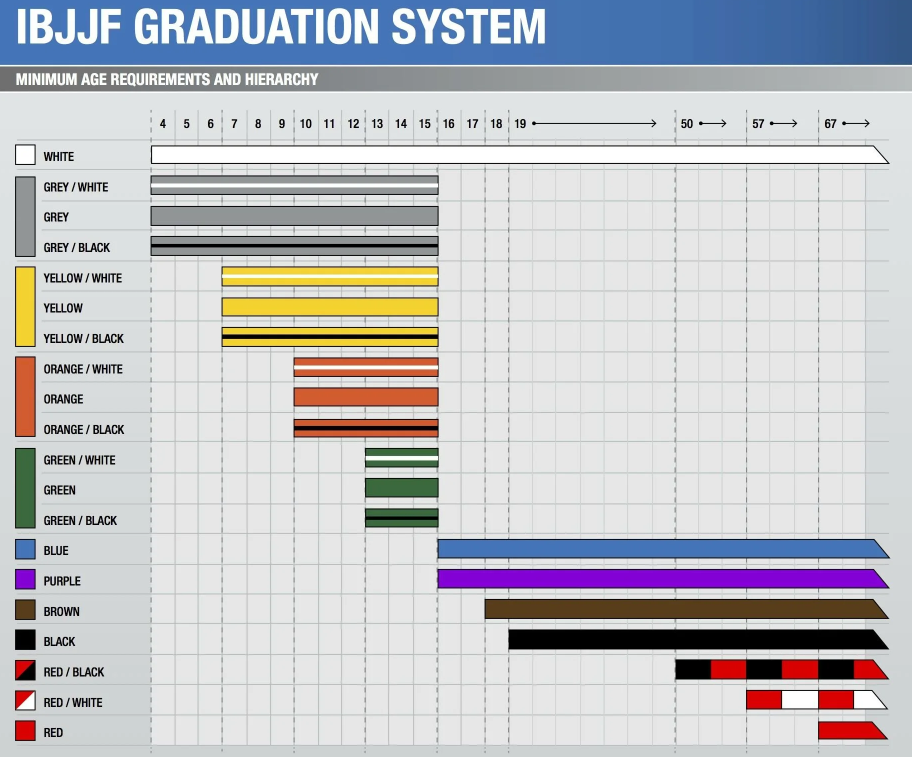